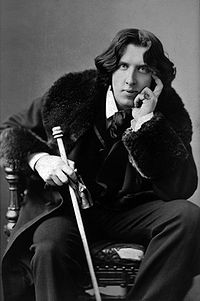 Oscar Fingal O'Flahertie Wills Wilde was born in Dublin. He was the second of three children born to Sir William Wilde and his wife Jane Francesca Wilde. The other siblings were an older brother known as Willie and a sister named Isola. His sister, Isola, died aged eight of what appears to have been meningitis. Wilde's poem Requiescat is dedicated to her memory: "Tread lightly, she is near/ Under the snow... All my life's buried here/ Heap earth upon it..."

His father's extramarital affairs produced three other children: Henry Wilson, born in 1838, and Emily and Mary Wilde, born in 1847 and 1849 respectively. Emily and Mary died in a horrifying accident in 1871 when the dress of one caught fire; her sister rushed her out of the house and down the steps to roll her in the snow, but her dress also took fire, and both died.

He was educated at home until he was nine, when he attended Portora Royal School in Enniskillen, Fermanagh. He went on to study classics at Trinity College, Dublin. Wilde was an outstanding student and won the Berkeley Gold Medal, the highest award available to classics students at Trinity. He was encouraged to compete for a demyship to Magdalen College, Oxford, which he won easily, he became a part of the Aesthetic movement; one of its tenets was to make an art of life.

He became a celebrated playwright, poet and the author of numerous short stories and one novel. Known for his biting wit, he was one of the most successful playwrights of the late Victorian era in London, and one of the greatest "celebrities" of his day. Several of his plays continue to be widely performed, especially The Importance of Being Earnest.

As the result of a widely covered series of trials, where the famous quote, "The love that dare not speak its name," was coined:-

Charles Gill (prosecuting): What is "the love that dare not speak its name?"

Wilde: "The love that dare not speak its name" in this century is such a great affection of an elder for a younger man as there was between David and Jonathan, such as Plato made the very basis of his philosophy, and such as you find in the sonnets of Michelangelo and Shakespeare. It is that deep spiritual affection that is as pure as it is perfect. It dictates and pervades great works of art, like those of Shakespeare and Michelangelo, and those two letters of mine, such as they are. It is in this century misunderstood, so much misunderstood that it may be described as "the love that dare not speak its name," and on that account of it I am placed where I am now. It is beautiful, it is fine, it is the noblest form of affection. There is nothing unnatural about it. It is intellectual, and it repeatedly exists between an older and a younger man, when the older man has intellect, and the younger man has all the joy, hope and glamour of life before him. That it should be so, the world does not understand. The world mocks at it, and sometimes puts one in the pillory for it."

Wilde suffered a dramatic downfall and was imprisoned for two years' hard labour after being convicted of homosexual relationships,

described as "gross indecency" with other men. His health suffered greatly, and after he was released from prison he set sail for Dieppe by the night ferry, never to return to Ireland or Britain.

In virtual exile, he went under the assumed name of Sebastian Melmoth, after Saint Sebastian and the devilish central character of Wilde's great-uncle Charles Maturin's gothic novel Melmoth the Wanderer. During this time he wrote the famous poem The Ballad of Reading Gaol, it was a commercial success and brought a little money.

He spent his last years in the Hôtel d'Alsace, now known as L'Hôtel, in Paris, where he lived in poverty. He corrected and published his plays An Ideal Husband and The Importance of Being Earnest, but otherwise had lost the "intense joy that creation requires". He is quoted as saying, just a month before his death, "My wallpaper and I are fighting a duel to the death. One of us has got to go." He died of cerebral meningitis on 30 November 1900 and on his deathbed was received into the Roman Catholic church, which he had previously described as, "for saints and sinners alone – for respectable people, the Anglican Church will do".

He was origninally buried in the Cimetière de Bagneux outside Paris but was later moved to Père Lachaise Cemetery in Paris. His tomb in Père Lachaise was designed by sculptor Sir Jacob Epstein, at the request of Robert Ross, who also asked for a small compartment to be made for his own ashes. Ross's ashes were transferred to the tomb in 1950. The epitaph on the tomb is a verse from The Ballad of Reading Gaol:

And alien tears will fill for him
Pity's long-broken urn,
For his mourners will be outcast men,
And outcasts always mourn.