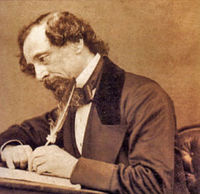 Charles John Huffam Dickens (1812 – 1870), was an English novelist. During his career Dickens achieved massive worldwide popularity, winning acclaim for his rich storytelling and memorable characters. He was the foremost novelist of the Victorian era as well as a vigorous social campaigner.

He wrote serialised novels, which was the usual format for fiction at the time, and each new part of his stories would be eagerly anticipated by the reading public. The popularity of his novels and short stories during his lifetime and to the present is demonstrated by the fact that none of them have ever gone out of print. He is regarded by many one of the English language's greatest writers.