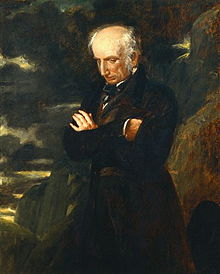 William Wordsworth was one of the major English Romantic poets who, with Samuel Taylor Coleridge, helped to launch the Romantic Age in English literature.

The second of five children born to John Wordsworth and Ann Cookson, he was born on 7 April 1770 in Wordsworth House in Cockermouth, Cumberland—part of the scenic area in northwest England, the Lake District.

He made his debut as a writer in 1787 when he published a sonnet in The European Magazine. He often spent his holidays on walking tours, visiting places famous for the beauty of their landscape. In 1790, he took a walking tour of Europe, during which he toured the Alps extensively, and visited nearby areas of France, Switzerland, and Italy. He attended St John's College, Cambridge, and received his B.A. degree in 1791.

He received an honorary Doctor of Civil Law degree in 1838 from Durham University, and the same honour from Oxford University the next year. In 1842 the government awarded him a civil list pension amounting to £300 a year. With the death in 1843 of Robert Southey, Wordsworth became the Poet Laureate. He initially refused the honour, saying he was too old, but accepted when Prime Minister Robert Peel assured him "you shall have nothing required of you" (he became the only laureate to write no official poetry).

Wordsworth's magnum opus is generally considered to be The Prelude, a semiautobiographical poem of his early years which he revised and expanded a number of times, but his most famous poem is "I wandered lonely as a cloud".