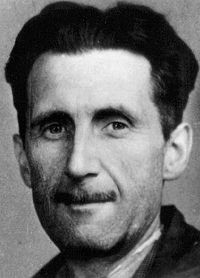 Eric Arthur Blair (25 June 1903 – 21 January 1950), is better known by the pen name George Orwell. He was born on 25 June 1903 to British parents in Motihari, Bengal Presidency, British India, but his mother brought him to England at the age of one.

He was an English author and journalist and is considered to be one of the most widely admired English-language essayists of the 20th century. His best known works were critical of totalitarianism in general, and Stalinism in particular: Animal Farm and Nineteen Eighty-Four. Both were written and published towards the end of his life.

Some of Nineteen Eighty-Four's lexicon has entered into the English language.

* Newspeak: a thoroughly politicised and obfuscatory language designed to make coherent thought impossible by limiting acceptable word choices.
* Big Brother', or 'Big Brother is watching you': Today, security cameras are often thought to be modern society's big brother. The television reality show Big Brother carries that title because of Nineteen Eighty-Four.
* The same novel spawned the title of another UK television series, Room 101.
* The phrase 'thought police' is also derived from Nineteen Eighty-Four, and might be used to refer to any alleged violation of the right to the free expression of opinion. It is particularly used in contexts where free expression is proclaimed and expected to exist.
* Doublethink is a Newspeak term from Nineteen Eighty-Four, and is the act of holding two contradictory beliefs simultaneously, fervently believing both.

In the book Animal Farm, "all animals are equal, but some animals are more equal than others", is sometimes used to satirise situations where equality exists in theory and rhetoric but not in practice.

He may also have been the first to use the term "cold war". He used it in an essay titled "You and the Atomic Bomb" on October 19, 1945 in the Tribune, he wrote: "We may be heading not for general breakdown but for an epoch as horribly stable as the slave empires of antiquity. James Burnham's theory has been much discussed, but few people have yet considered its ideological implications — this is, the kind of world-view, the kind of beliefs, and the social structure that would probably prevail in a State which was at once unconquerable and in a permanent state of 'cold war' with its neighbours."