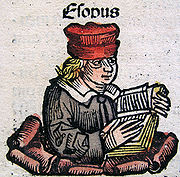 Aesop, or Æsop wrote a collection of fables called Aesopica. Not much is known about Aesop himself, not even his place of birth, some say Greece, some say Asia Minor and some Africa, but it is generally thought that he was a slave.

According to the historian Herodotus, Aesop met with a violent death by the hands of the inhabitants of Delphi, who pushed him off a cliff, though the cause was not stated. Various suggestions were made by later writers, such as his insulting sarcasms, the embezzlement of money entrusted to him by Croesus for distribution at Delphi, and his alleged sacrilege of a silver cup. A pestilence that ensued was blamed on his execution, and the Delphians declared their willingness to make compensation, which, in default of a nearer connection, was claimed by Iadmon (Ιάδμων), grandson of Aesop's former master.

Some of the fables such as The Fox and the Grapes (from which the idiom "sour grapes" was derived), The Tortoise and the Hare and The Shepherd Boy and the Wolf (also known as The Boy Who Cried Wolf), are well-known throughout the world. Here is a selection of my favourites.